Who's going? Is the conference growing? And what's the attendee churn?

DISCLAIMER: The analysis is based on publicly available attendee data, published on the NOAH website. There might be errors in the source data, which would also affect the analysis.

NOAH Berlin is growing, while London is getting smaller

NOAH Berlin had a setback in 2017 but was growing strong again this year.

NOAH London, however, has seen a decline in the number of attendees since 2013.

Most of the attendees each year are visiting for the first time!

The Churn Rate from year to year is pretty constant: around 75%

It seems that most people go to exactly one NOAH conference:

True to expectations, most attendees come from Consumer Internet and Investment Firms.

Most attendees are CEOs

The most frequent job description is CEO or equivalent.

Massive power outages cause chaos for the general public, and they cost utility providers roughly $49 billion a year.

This wouldn’t be much of a problem if massive power outages were rare, but outages affecting more than 50,000 people have increased dramatically in recent years. This means utility companies need to find new ways of anticipating and managing these outages.

These days, smart grids are producing massive amounts of data, which means predicting and managing outages is easier than ever. Unlike traditional power grids, which are one-directional (meaning they only transmit power in one direction), smart grids are two-directional. They can capture data from every possible source in the grid at the same time as they’re providing electricity. They collect and monitor data from sources like smart meters, IoT devices, and power generation stations, providing a clear, real-time look at power usage.

Machine learning can use this data to anticipate and prevent massive power outages in the grid. Machine learning helps identify non-obvious patterns in the data that can be a precursor to grid failure, which helps maintenance teams preempt failure. 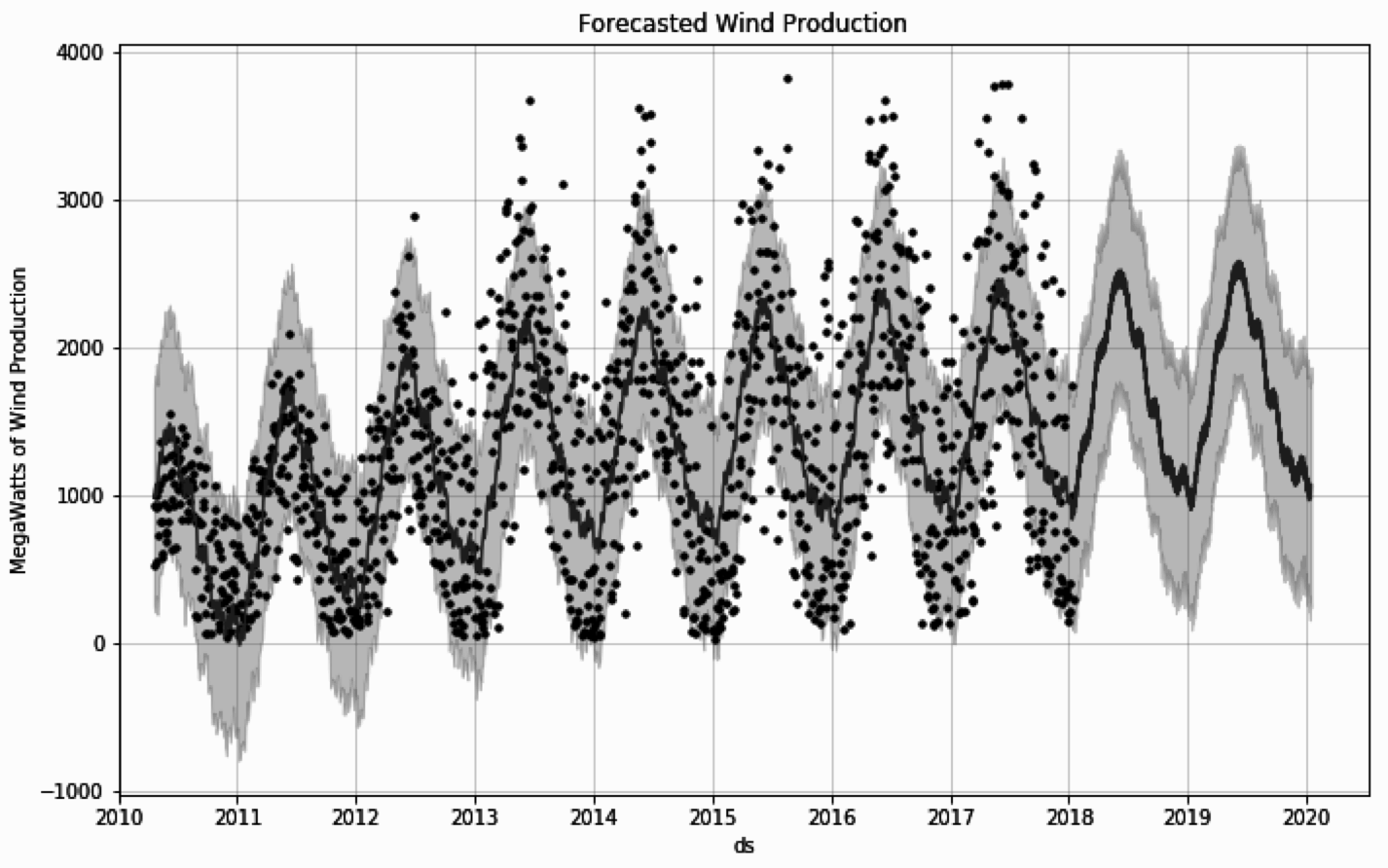 Balancing the grid — making sure energy supply matches energy demand — is one of the most important jobs a transmission operator has. But renewable energy sources depend heavily on the weather, making them harder to predict.

Transmission operators spend millions each year fixing planning mistakes that lead to producing too much or too little power. In hybrid systems — which rely on both renewable energy sources and fossil fuels to generate electricity — these mistakes have to be corrected at the last minute by buying more energy or compensating power plants for the excess.

Machine learning is the most accurate method available to forecast the output of renewable energy. Advanced methods, like Long Short-Term Neural Networks (LSTMs), can weigh the many factors involved — wind, temperature, sunlight, and humidity forecasts — and make the best predictions. This saves money for operators and preserves resources for power plants.

Preventing Blackouts and Brownouts With Real-time Monitoring and AI Prediction

Power grids have a lot of obstacles to overcome in providing continuous energy to customers. Weather patterns, usage, internal failure, even wildcard incidents like lightning strikes and interference from wild animals can all affect power delivery.

Sensors like phase measurement units (PMU) and smart meters can provide usage information in real-time. When combined with both historical and simulation data, AI can help mitigate potential grid failure, using techniques like grid balancing and demand response optimization. Incidents that would otherwise have affected millions of people can be contained to a smaller area and fixed faster for less money.

Cyber attacks are increasingly used to target important infrastructure, like shutting down hospitals with Ransomware attacks (when attackers break into the system and lock legitimate users out until a ransom is paid). With utility grids, a cyber attack can have widespread consequences and affect millions of users.
‍
Detecting these attacks is critical.
‍
Developers are using machine learning to differentiate between a fault (a short-circuit, for example) or a disturbance (such as line maintenance) in the grid and an intelligent cyber attack (like a data injection).
‍
Since deception is a huge component of these attacks, the model needs to be trained to look for suspicious activity – things like malicious code or bots – that get left behind after the deception has occurred.
‍
One such method uses feature extraction with Symbolic Dynamic Filtering (an information theory-based pattern recognition tool) to discover causal interactions between the subsystems, without overburdening computer systems. In testing, it accurately detected 99% of cyber attacks, with a true-positive rate of 98% and a false-positive rate of less than 2%. This low false-positive rate is significant because false alarms are one of the biggest concerns in detecting cyber attacks.

Utility providers are looking for ways to better predict power usage while maintaining maintaining energy supply at all times. This becomes critical when renewable power sources (like solar or wind) are introduced into the grid.
‍
Because these renewable power sources rely on elements beyond human control (like the weather), utility providers know they can’t always rely on renewables for continuous production. Knowing precisely when demand levels will peak allows utility providers to connect to secondary power sources (like conventionally generated electricity) to bolster the available resources and ensure constant service provision.
‍
More and more utility providers are turning to machine learning for help. We can feed historical data into machine learning algorithms -- like Support Vector Machines (SVM) -- to accurately forecast energy usage and ensure sufficient levels and constant supply.

Current methods for detecting faults in the grid consume a lot of unnecessary time and resources. This creates a situation where power transmission is interrupted and customers are without electricity while faults are first located, then fixed.
‍
Machine learning can find faults quickly and more accurately helping you minimize service interruption for your customers.. Support Vector Machines (SVM) are combined with Discrete Wavelet Transformation (DWT) to locate faults in the lines using a traveling wave-based location method.
‍
When we apply  DWT (a form of numerical and functional analysis that captures both frequency and location information) to the transient voltage recorded on the transmission line, we can determine the location of the fault by calculating aerial and ground mode voltage wavelets. So far, this method has detected fault inception angles, fault locations, loading levels, and non-linear high-impedance faults for both aerial and underground transmission lines.

In the energy world, “non-technical losses” means energy theft or fraud from the system.
‍
There are two common types of non-technical losses. The first is when a customer uses more energy than the meter reports. The second involves rogue connections stealing energy from paying customers. To pull off this theft or fraud, bad actors can bypass smart meters completely or insert chips into the system that change how meters track energy use. Meter readers can also be bribed to report lower numbers (though thanks to smart meters, this is increasingly hard to do).
‍
Because these non-technical losses cost $96 billion annually, utility providers are turning to machine learning to combat the problem.
‍
We can help utility providers mine historical customer data to discover irregularities that indicate theft or fraud. These can be things like unusual spikes in usage, differences between reported and actual usage, and even evidence of equipment tampering.

Accurately predicting customers’ energy needs is critical for any utility provider. To date, we haven’t found an adequate solution for bulk energy storage, which means energy needs to be transmitted and consumed almost as soon as it’s produced.

We're using machine learning to increase the accuracy of these predictions. Historical energy use data, weather forecasts, and the types of businesses or buildings operating on a given day all play a role in determining how much energy is used.
‍
For example, a hot summer day mid-week means more energy usage because office buildings run air conditioning at a high capacity. Weather forecasts and historical data can help identify those patterns in time to prevent rolling blackouts caused by air conditioners in the summer.
‍
Machine Learning finds complicated patterns in the various influencing factors (such as day, time, predicted wind and solar radiation, major sports events, past demand, mean demand, air temperature, moisture and pressure, wind direction, day of the week, etc.) to explain the development of demand. Because machine learning finds more intricate patterns, its predictions are more accurate. This means energy distributors can increase efficiency and decrease costs when they buy energy – without having to make expensive adjustments.

Wind is a great renewable energy source, but wind turbine maintenance is notoriously expensive. It accounts for up to 25% of the cost per kWh. And fixing problems after they occur can be even more expensive.

Machine learning can help you get ahead of this problem. The goal is to reduce maintenance costs by catching problems before the turbine malfunctions. This is particularly important when wind farms are located in hard-to-access places, such as the middle of the ocean, which makes repair costs even higher.

For example, data from sensors found within the turbines – such as oil, grease, and vibration sensors – have been used to train machine learning models to identify precursors to failure, such as low levels of lubricant.

This method can train machine learning models to predict failures up to 60 days in advance.

As personal power generation (using solar or wind power) gets easier and cheaper, consumers and businesses are increasingly producing their own power.

Personal power generation allows people to make, consume, and store their own energy. Depending on where they live, they may even be able to sell surplus power back to the local power utility.

Machine learning can help find the best time to produce, store, or sell this energy. Ideally, energy should be consumed or stored when prices are low and sold back to the grid when prices are high.

By looking at historical data, usage trends, and weather forecasts, machine learning models have made accurate predictions on an hourly basis. People with personal and business energy generation systems can use these predictions to make strategic decisions about whether to use, store, or sell their energy.

For example, Adaptive Neural Fuzzy Inference System (ANFIS) has been used to predict short-term wind patterns for wind power generation. This allows producers to maximize energy production and sell it when energy prices are at their peak.

In open energy markets, where customers have a choice of utility providers, understanding which customers are going to churn out can be critical. Churn rates, which is the percentage of customers who stop using your service in a year, can be as high as 25%. Being able to predict churn and stay ahead of it is essential to survival.

Machine learning is helping utility owners predict when a customer is getting ready to churn out. By using techniques such as Cross-industry Standard Process for Data Mining (CRISP-DM), AdaBoost, and Support Vector Machines, as well as historical usage data, utility providers can identify key indicators of whether or not a customer is going to churn. These indicators include things like customer satisfaction, employment status, energy consumption, home ownership or rental status. A change in any of these can indicate a customer is getting ready to terminate their service.

When these indicators are identified far enough in advance, it’s possible to avoid churn by working with customers to solve any problems they’re experiencing.

Just like natural gas and oil, wholesale energy is a market commodity. So naturally it's important for traders to be aware of market fluctuations and pricing when it comes to buying and selling energy.

To help make sense of the massive amounts of data used to make trading decisions, traders are increasingly turning to machine learning.

Talk to us about how machine learning can transform your business.

Setup a call with our CEO
markus@datarevenue.com